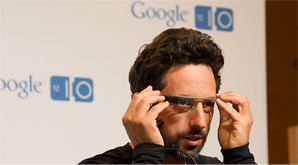 Back at SXSW, Google announced the Glass Mirror API — the first step in allowing developers to build apps, or "Glassware" for its wearable computing device. Now, developers will have a whole new set of tools at their disposal: the long-awaited Glass Development Kit (GDK). At a Glass hackathon today in Google’s San Francisco offices today, the company's senior development advocate Timothy Jordan finally took the wraps off Google’s new tool to let developers build Glassware that matches the feature set of the company’s own apps.

Jordan highlighted a few key ways that the GDK differs from Mirror. Apps can run in offline mode, they can get "real-time user response" without having to ping the cloud, and GDK apps can access the Glass hardware directly — which means new apps can take full advantage of the built-in GPS and gyroscope, for example. Android developers should feel right at home in the GDK — Jordan stressed that Google "worked really hard to make sure that if you’re an Android developer, developing for Glass would feel natural."

Perhaps the two biggest user-facing innovations that the GDK will allow are "live cards" and a focused, immersive experience. If you’ve used Glass, you’re familiar with the "timeline" paradigm — time-ordered cards from your interactions with Glass stack up to the right of the home screen. Now, live cards will let Glassware live to the left of the home screen and continually update as long as it's running. A simple example of that would be a stopwatch, continually ticking off time and updating live, that you could easily access with one swipe.