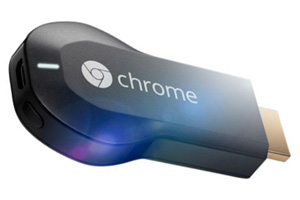 Google has reportedly launched an update to its Chromecast media streamer that signals the company's intention to heavily police what users can do with the device. As it stands now, Chromecast users can no longer stream local content to their HDTVs from a third-party app, a move believed to be no accidental side effect from the recent firmware update.

Cyanogenmod developer Koushik Dutta was reportedly working on his AirCast app for streaming local content – such as movies and TV shows stored on a hard drive – and discovered that it no longer functions after the latest Chromecast update. More specifically, Google reportedly disabled "video_playback" support from the Chromecast application.

"Given that this is the second time they've purposefully removed/disabled the ability to play media from external sources, it confirms some of my suspicions that I have had about the Chromecast developer program: The policy seems to be a heavy handed approach, where only approved content will be played through the device," Dutta reports on Google Plus. "The Chromecast will probably not be indie developer friendly. The Google TV team will likely only whitelist media companies."