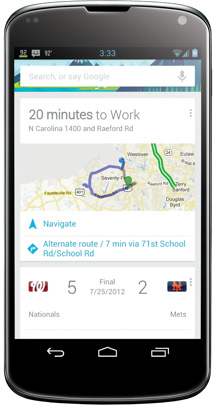 Google made its Nexus 7 tablet available in the United Kingdom Wednesday. It can be purchased directly from the U.K. Google Play Store website. It costs £199 for the 16-GB model and £239 for the 32-GB model. In the U.S., the Nexus 7 runs $229 and $259 for the 16- and 32-GB models, respectively. Other than the price, the specs of Google's small tablet are the same across the board. It is also available in Canada, France, Germany and Japan.

The Nexus 7 features a 7-inch display with 1920 x 1200 pixels. It is capable of playing full HD content and looks great doing so. The Nexus 7 runs on a 1.5-GHz quad-core Qualcomm Snapdragon S4 Pro with an embedded Qualcomm Adreno 320 GPU. It has dual cameras for snapping photos and doing video chats, sports stereo speakers, and includes GPS, Wi-Fi and Bluetooth 4.0. All Nexus-branded devices run a clean version of Android. In the N7's case, that means Android 4.3 Jelly Bean.

Google has yet to release the promised LTE 4G variant of the Nexus 7. It originally said the LTE version would shortly follow the Wi-Fi-only model. It's been more than a month, and it has yet to arrive. The LTE version will be able to connect to the LTE networks of AT&T, T-Mobile and Verizon Wireless in the U.S. (Nope, no Sprint 4G.) The LTE model will carry a $100 price premium over the Wi-Fi model.